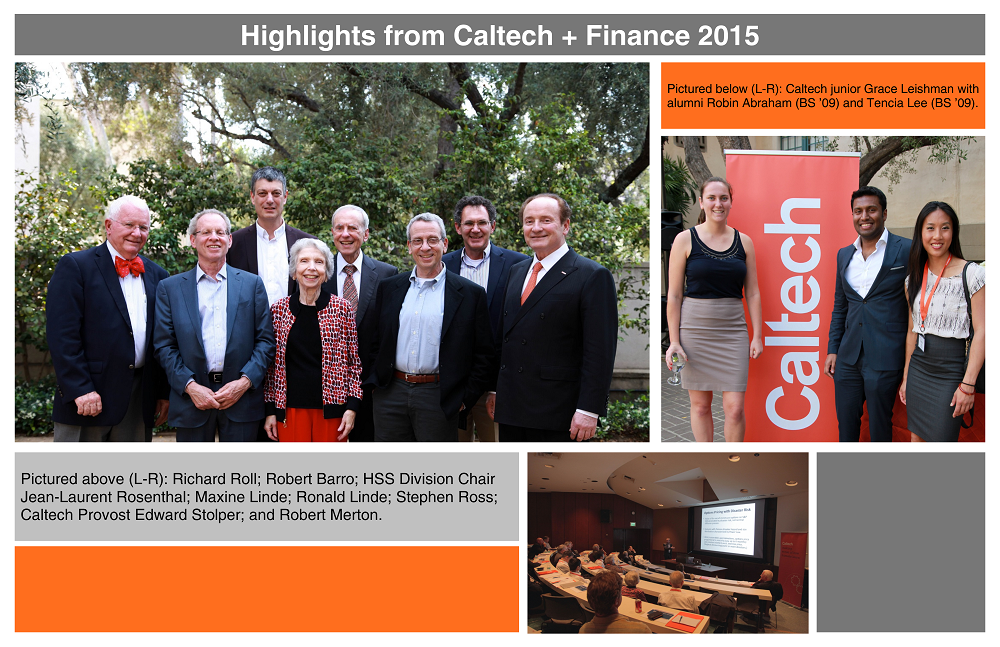 Caltech faculty and alumni have helped shape finance and economics and have influenced economic theory, policy, and practice. At this inaugural event celebrating the Institute's eminent history and bright future in these fields, three of Caltech's most distinguished alumni offered their insights as leaders in business finance and scholars of financial economics.

Robert J. Barro is Paul M. Warburg Professor of Economics at Harvard University, a senior fellow of the Hoover Institution at Stanford University, and a research associate of the National Bureau of Economic Research. He has a PhD in economics from Harvard University and a BS in physics from Caltech. Barro is co-editor of Harvard's Quarterly Journal of Economics and was recently president of the Western Economic Association and vice president of the American Economic Association. He was a viewpoint columnist for Businessweek from 1998 to 2006 and a contributing editor for the Wall Street Journal from 1991 to 1998. His areas of noteworthy research include empirical determinants of economic growth, economic effects of public debt and budget deficits, and the formation of monetary policy. His current research focuses on the impact of rare disasters on asset markets and macroeconomic activity, with recent applications to environmental protection and quantities of safe assets. He is the author of Macroeconomics: A Modern Approach; Economic Growth (2nd edition, with Xavier Sala-i-Martin); Nothing Is Sacred: Economic Ideas for the New Millennium; Determinants of Economic Growth; Getting It Right: Markets and Choices in a Free Society; and Education and Modernization Worldwide, from the 19th to the 21st Century (with Jong-Wha Lee), among other books.

Merton received the Alfred Nobel Memorial Prize in Economic Sciences in 1997 for a new method to determine the value of derivatives.

Merton is the author of Continuous-Time Finance and a co-author of Cases in Financial Engineering: Applied Studies of Financial Innovation; The Global Financial System: A Functional Perspective; Finance; and Financial Economics. He has also been recognized for translating finance science into practice. Merton received the inaugural Financial Engineer of the Year Award from the International Association for Quantitative Finance (formerly the International Association of Financial Engineers), which also elected him a Senior Fellow. He received the 2011 CME Group Melamed-Arditti Innovation Award and the 2013 WFE Award for Excellence from World Federation of Exchanges. A Distinguished Fellow of the Institute for Quantitative Research in Finance ("Q Group") and a Fellow of the Financial Management Association, Merton received the Nicholas Molodovsky Award from the CFA Institute. He is a member of the Halls of Fame of the Fixed Income Analysts Society, Risk magazine, and Derivatives Strategy magazine. Merton received Risk's Lifetime Achievement Award for contributions to the field of risk management.

Merton received a BS in engineering mathematics from Columbia University, an MS in applied mathematics from Caltech, and a PhD in economics from MIT. He has also been awarded honorary degrees from thirteen universities.

Stephen A. Ross is the Franco Modigliani Professor of Financial Economics at the MIT Sloan School of Management.

He was previously the Sterling Professor of Economics and Finance at Yale University and, prior to that, Professor of Economics and Finance at the Wharton School of the University of Pennsylvania. Ross is the Managing Partner of Ross, Jeffrey & Antle (RJA), a registered investment advisor specializing in providing options overlays, and he is also the chairman of Compensation Valuation, Inc. (CVI), which advises on option valuations for corporations that issue employee stock options.

Ross is the author of more than 100 articles in economics and finance and is the co-author of an introductory textbook in finance. He is perhaps best known for having invented the Arbitrage Pricing Theory and the Theory of Agency, and as the co-discoverer of risk-neutral pricing and of the binomial model for pricing derivatives. Models developed by Ross and his colleagues, including term-structure models and option-pricing models, are now standards for pricing in major securities trading firms.

He has been the recipient of numerous prizes and awards, including the Graham and Dodd Award for financial writing, the Pomerance Prize for excellence in the area of options research, the University of Chicago's Leo Melamed Prize for the best research by a business school professor, and the 1996 IAFE Financial Engineer of the Year Award. In 2006, he was the first recipient of the CME-MSRI Prize in Innovative Quantitative Applications; in 2007, he won the Jean-Jacques Laffont Prize, given by the Toulouse School of Economics; in 2012, he won the Onassis Prize in Finance; and in 2014, he won the Morgan Stanley Prize and AFA Award. A Fellow of the Econometric Society and a member of the American Academy of Arts and Sciences, he currently serves as an associate editor of several economics and finance journals and in 1988 was president of the American Finance Association.

Ross has been a consultant to a number of investment banks as well as many major corporations. In addition, he has served as an advisor to government departments such as the U.S. Treasury, the Commerce Department, the Internal Revenue Service, and the EXIM Bank. He co-founded and was the co-chairman of Roll and Ross Asset Management Corp., an equity money manager, and was chairman of the American Express Advisory Panel. He is a former director of General Re and of CREF, a former member of the board of directors of Freddie Mac, a trustee of Caltech (where he chaired the investment committee), and a current director of Dataminr. He holds a BS in physics from Caltech and a PhD in economics from Harvard University.